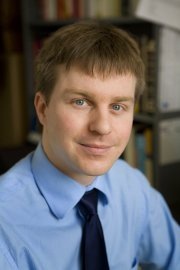 Professor Hennig received his Diploma in Physics at the University of Göttingen in 1996 and his Ph.D. in Physics from Washington University in St. Louis in 2000. After working as a postdoctoral researcher and research scientist at Ohio State University, he joined the faculty of the Department of Materials Science and Engineering at Cornell in 2006 as an Assistant Professor. In 2014 he moved to the University of Florida where he is the Alumni Professor of Materials Science and Engineering and the Associate Director, Quantum Theory Project.